The smell of napalm will hit Blu-ray in June.

In an early announcement to retailers, Lionsgate is preparing 'Apocalypse Now: Triple Feature' for Blu-ray on June 7.

Nominated for eight Academy Awards, this classic and compelling Vietnam War epic stars Martin Sheen as Army Captain Willard, a troubled man sent on a dangerous and mesmerizing odyssey into Cambodia to assassinate a renegade American colonel named Kurtz (Marlon Brando), who has succumbed to the horrors of war and barricaded himself in a remote outpost. Also includes the 202 minute Redux cut and the documentary 'Hearts of Darkness.'

You can find the latest specs for 'Apocalypse Now: Triple Feature' linked from our Blu-ray Release Schedule, where it's indexed under June 7. 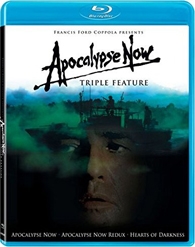