Prepare to return to the woods on Blu-ray in January.

In an early announcement to retailers, Lionsgate is preparing 'Blair Witch' for Blu-ray on January 3.

A group of college students venture into the Black Hills Forest in Maryland to uncover the mysteries surrounding the disappearance of their friend's sister, who many believe is connected to the legend of the Blair Witch. At first the group is hopeful, especially when a pair of locals offer to act as guides through the dark and winding woods, but as the endless night wears on, the group is visited by a menacing presence. Slowly, they begin to realize the legend is all too real and more sinister than they could have imagined.

The Blu-ray will feature 1080p video, a Dolby Atmos soundtrack, and supplements will include:

You can find the latest specs for 'Blair Witch' linked from our Blu-ray Release Schedule, where it's indexed under January 3. 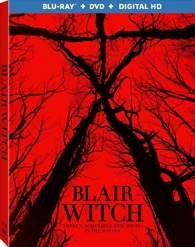 Discs mentioned in this article: (Click for specs and reviews)
Blair Witch (Blu-ray)