Golden Globe® winner Oscar Isaac stars in his most intensely evil role in this riveting thriller arriving on Blu-ray in April.

In an early announcement to retailers, Lionsgate will be releasing 'Mojave' on Blu-ray on June 26.

Mojave is a classic, cerebral thriller about a brilliant artist, Thomas (Garrett Hedlund), who attempts to escape his privileged existence by heading out to the desert, only to encounter homicidal, chameleon-like drifter Jack (Oscar Isaac). Their first encounter at a campfire sets up a nonstop, violent duel of physical and intellectual equals, a chase that moves from the spectacular vistas of the American desert to a noir Los Angeles, where Thomas's notoriety as an artist is revealed. Jack, for his part, continues to remake his own identity in relentless pursuit of his victim, culminating in a vortex of criminality and brutality as Thomas emerges as an equally dangerous opponent.

The Blu-ray will feature 1080p video, lossless 5.1 audio, and supplements include: A Doppelgänger and the Desert: Making Mojave; and Deleted Scenes.

You can find the latest specs for 'Mojave' linked from our Blu-ray Release Schedule, where it is indexed under April 5. 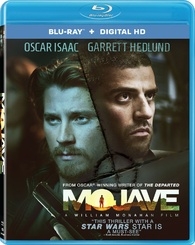