'A Most Wanted Man' Blu-ray Announced

Philip Seymour Hoffman's final film arrives on Blu-ray this November. You can pre-order the Blu-ray here.

In an early announcement to retailers, Lionsgate will be releasing 'A Most Wanted Man' on Blu-ray on November 4.

German intelligence agent Günther Bachmann (Philip Seymour Hoffman) must race against time to solve a perilous mystery: Is the half-Chechen, half-Russian Muslim who's surfaced in Hamburg a victim seeking refuge...or a terrorist seeking revenge? Hoffman's mesmerizing turn as Bachmann will glue you to your seat until the final, shattering conclusion of this John le Carré thriller.

Specs have yet to be revealed, but supplements will include: two featurettes: "The Making of A Most Wanted Man" and "Spymaster: John le Carré in Hamburg".

You can find the latest specs for 'A Most Wanted Man' linked from our Blu-ray Release Schedule, where it's indexed under November 4. 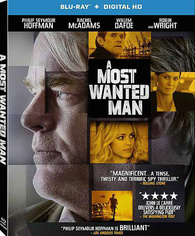