The classic horror film will be hitting 4K UHD next month.

As previously reported, Lionsgate is preparing to release Halloween on 4K Ultra HD Blu-ray, and now the date is set for September 25.

On a black and unholy Halloween night years ago, little Michael Myers brutally slaughtered his sister in cold blood. But for the last fifteen years, town residents have rested easy, knowing that he was safely locked away in a mental hospital — until tonight. Tonight, Michael returns to the same quiet neighborhood to relive his grisly murder again...and again...and again. For this is a night of evil. Tonight is Halloween!

The release will feature a Dolby Vision presentation, a lossless 7.1 soundtrack, and supplements include:

•    “The Night She Came Home” Featurette

You can find the latest specs for Halloween - 4K Ultra HD Blu-ray linked from our 4K Blu-ray Release Schedule, where it is indexed under September 25. 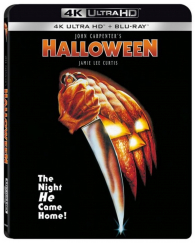