THE DOORS: THE FINAL CUT Dated and Detailed for 4K Ultra HD Blu-ray

Lionsgate is preparing The Doors: The Final Cut for 4K Ultra HD Blu-ray on July 23.

In 1991, Oliver Stone crafted a psychedelic and powerful musical portrait that brilliantly captured the furious energy of the ‘60s and the myth of The Doors’ iconic front man, Jim Morrison - the man whose music shaped an era. Two decades later, Lionsgate presents a stunning new 4K restoration — The Doors: The Final Cut — supervised by Oliver Stone and brought to life with Dolby Vision® and Dolby Atmos®, which will take audiences back in time, into the world and sound of the psychedelic ‘60s. Relive Val Kilmer’s hypnotic performance as the legendary Jim Morrison, alongside stellar performances from Meg Ryan, Kevin Dillon, and Kyle MacLachlan, who tell the story of The Doors’ humble beginnings in Los Angeles to the height of their popularity.

“This brand-new 4K restoration of The Doors in Dolby Atmos® will provide far greater overall clarity and dimension for the audience. During the many concert sequences, the sound now fills the auditorium above the audience, behind it, and all points in between. I wanted the film to be as immersive as possible to a real ‘60s Doors experience,” said director Oliver Stone. “Additionally, I’ve made one cut of three minutes to a scene I thought was superfluous to the ending, which helps close out the film in a more powerful way.” 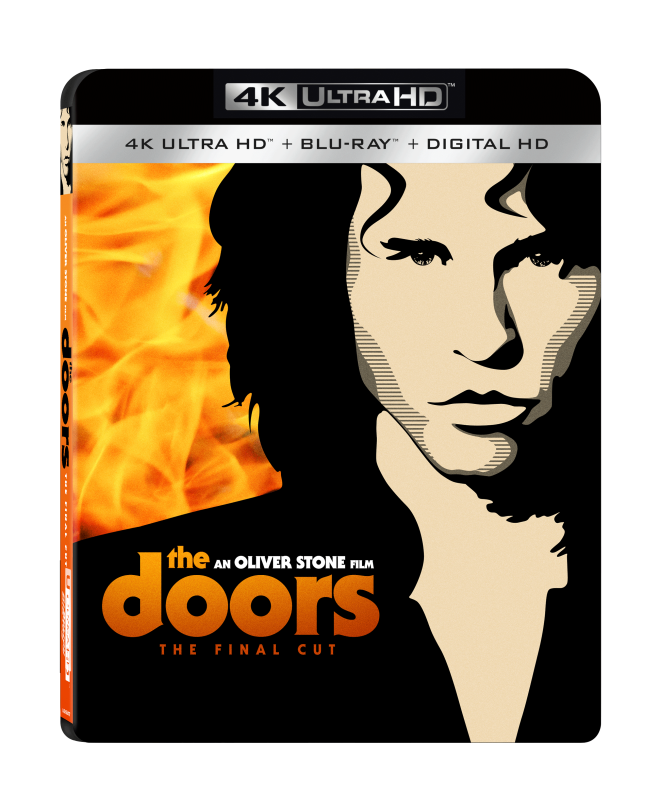 Remastered from the original negative that was scanned in 4K 16-bit on ARRISCAN at FotoKem US, the restoration was managed by L’Immagine Ritrovata in Italy with the close support of Oliver Stone who oversaw the color grading. The 4K release was re-mastered using Dolby Vision® HDR and Dolby Atmos® technologies for an unprecedented immersive experience. When compared to a standard picture, Dolby Vision can deliver spectacular colors never before seen on a screen, highlights that are up to 40 times brighter, and blacks that are 10 times darker. Dolby Atmos transports you from the ordinary to the extraordinary through breathtaking moving audio that flows all around you. When listening to The Doors perform throughout the film, Dolby Atmos will allow you to hear incredible clarity with every sound and greater spatial separation of instruments, vocals, and harmonies. The Dolby Atmos® mix was created at Formosa Group under the supervision of Dolby and the original sound editors of the film: Wylie Stateman and Lon Bender. This new mix will offer audiences a unique, immersive experience of the amazing film soundtrack, which includes over twenty-five songs from The Doors back catalogue.

You can find the latest specs for The Doors: The Final Cut - 4K Ultra HD Blu-ray linked from our 4K Blu-ray Release Schedule, where it is indexed under July 23.