The hellborn hero returns to home video this July.

Lionsgate says Hellboy (2018) will be available on 4K Ultra HD Blu-ray and Blu-ray on July 23.

Hellboy is back, and he's on fire. From the pages of Mike Mignola's seminal work, this action-packed story sees the legendary half-demon superhero (David Harbour) called to the English countryside to battle a trio of rampaging giants. There he discovers The Blood Queen, Nimue (Milla Jovovich), a resurrected ancient sorceress thirsting to avenge a past betrayal. Suddenly caught in a clash between the supernatural and the human, Hellboy is now hell-bent on stopping Nimue without triggering the end of the world.

The 4K release will feature a Dolby Vision video presentation, a Dolby Atmos soundtrack, and supplements on both releases will include:

You can find the latest specs for Hellboy linked from our 4K and Blu-ray Release Schedules, where it is indexed under July 23. 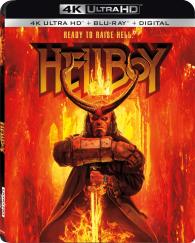