Lionsgate (in association with Saban Films) says 3 From Hell will be available on 4K Ultra HD Blu-ray and Blu-ray on October 15.

First there was House of 1000 Corpses. Then there was The Devil's Rejects. Now, from writer/director Rob Zombie, comes the next blood-soaked chapter in the most violent crime saga in history… 3 From Hell.

UPDATE: Both releases will feature the Unrated Cut with a lossless 7.1 soundtrack and supplements include:

“To Hell and Back: The Making of 3 From Hell” Featurette (4-Part Documentary Available on 4K and Blu-ray Only; Part 1 Available on DVD).

You can find the latest specs for 3 From Hell linked from our 4K and Blu-ray Release Schedules, where it is indexed under October 15. 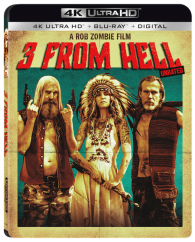 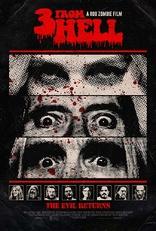