The acclaimed drama starring Daniel-Day Lewis and Brenda Fricker in their Oscar-winning roles has now been fully detailed for Blu-ray. Pre-orders are now available.

As previously reported, Lionsgate is working on 'My Left Foot' for Blu-ray on January 13.

This cinematic masterpiece is the brilliant portrayal of legendary Irishman Christy Brown (Day-Lewis) who, despite crippling cerebral palsy, learned to use his one controllable extremity -- his left foot -- to become an accomplished artist and writer.

The Blu-ray will feature 1080p video, a lossless 5.1 soundtrack, and supplements include: The Real Christy Brown and An Inspirational Journey: The Making of My Left Foot.

You can find the latest specs for 'My Left Foot' linked from our Blu-ray Release Schedule, where it is indexed under January 13. 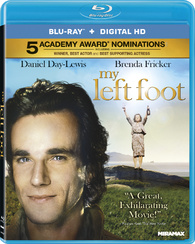