LG has announced the launch of Apple AirPlay 2 and HomeKit support for the company's 2019 ThinQ TV lineup, including its OLED, NanoCell, and select UHD TV models. The firmware update is now rolling out to compatible displays in 140 countries.

"LG remains at the forefront of TV technological innovation because of our never-ending quest to deliver the best home viewing experience," said Brian Kwon, president LG Mobile Communications and Home Entertainment companies. "With Apple AirPlay 2 and HomeKit support, we are demonstrating our commitment to offering consumer benefits that go beyond just best-in-class picture quality." 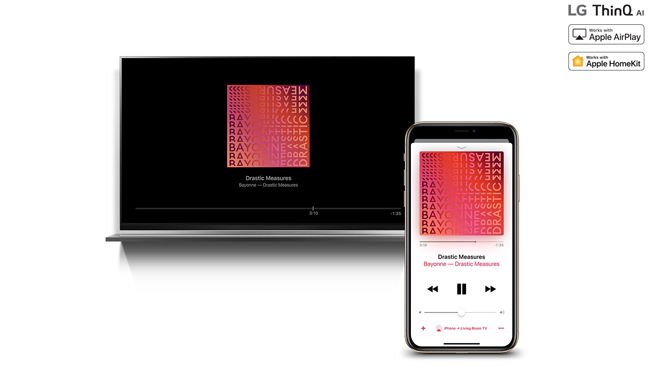 AirPlay 2 support enables LG 2019 ThinQ TVs to stream content from iPhone, iPad, and Mac devices. Likewise, the tech is also compatible with Dolby Vision playback from supported services like the Apple TV app. With that said, the feature does not currently transmit Dolby Atmos audio. And in addition to streaming videos, the tech can also be used to view photos and listen to music from Apple products on a user's ThinQ TV. Separate AirPlay 2-compatible speakers can also be used for audio playback.

Meanwhile, with HomeKit support, users can now control their compatible LG TVs via the Apple Home app or Siri on Apple devices. Supported functions include power, volume, source, and other basic controls. Likewise, LG TVs can also be added to scenes or automations with other HomeKit accessories.