The new projector will be on display at CES 2017.

LG has detailed its first compact laser projector, the ProBeam (HF80JA). The device is set to be the industry's lightest Full HD laser projector in the 2,000 lumens range.

"As a leader in LED projectors worldwide, LG is confident its expertise in the home entertainment sector will make its first compact laser projector a hit with consumers," said Tim Alessi, head of product marketing at LG Electronics USA. "LG is proud to continue pioneering the home cinema experience in dynamic new ways." 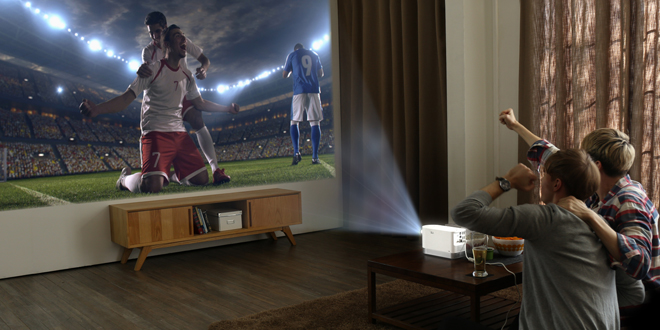 The LG ProBeam HF80JA features an advanced laser engine that is capable of producing up to 2,000 lumens of brightness. Likewise, the light 4.6-pound projector offers a slim, sleek build with a compact standing-type design and I-shaped laser engine for added portability. In addition, the device uses Sound Sync Adjustment tech, allowing the ProBeam to pair with any Bluetooth audio product, including external speakers or headphones. A wireless mirroring feature is included as well, letting customers use Miracast to project content from smart devices. Setting up the projector is also made simpler thanks to its four corner keystone and vertical auto keystone adjustments. Finally, the HF80JA integrates LG's webOS Smart TV platform, providing support for a growing collection of streaming services and apps -- all easily accessed through the LG Magic Remote Control.

An exact release date and pricing have not been announced yet, but the LG ProBeam HF80JA is expected to arrive in the first quarter of 2017. The projector will be on display at CES 2017 from January 5-8 in Las Vegas. In addition, the company has also announced plans to showcase its new HDR 32-inch Ultra HD 4K Monitor (32UD99) and 34-inch 21:9 UltraWide Mobile Monitor (34UM79M) at the show as well.