The new portable projector is the company's smallest model yet.

LG has announced the newest addition to its Minibeam line of projectors. The PV150G Minibeam Nano is an ultra-portable LED projector designed for mobility.

"As the number one LED projector maker in the world, we are committed to growing our Minibeam lineup for consumers who are becoming increasingly more mobile but don't want to give up the comforts of a big display when it comes to their entertainment," said Lee In-kyu, senior vice president and head of the TV and Monitor Division at LG's Home Entertainment Company. "The Minibeam Nano is the perfect projector for those who favor portability over everything else. And at only a quarter of a kilogram, you can't get much more portable than Minibeam Nano." 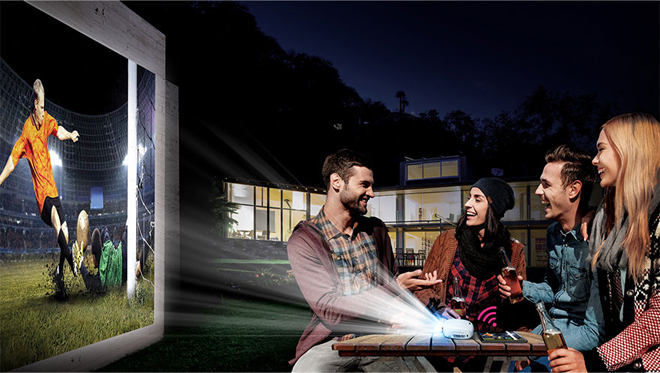 The Minibeam Nano weighs just 270 grams and features a resolution of 854 x 480. The projector offers a brightness level of 100 ANSI lumens, a contrast ratio of 100,000:1, and an LED lamp lifespan of up to 30,000 hours. In addition, the device includes an integrated 3,800mAh battery for up to 2 hours of playback off of a single charge. Likewise, wired and wireless Mirroring support for smartphones, tablets, and PCs is included as well, along with USB drive playback. The PV150G can project images up to 100-inches and has a throw ratio of 1.64.

Pricing has not been detailed yet, but LG's Minibeam Nano is expected to start shipping later this month.