The company has unveiled the world's first 88-inch 8K OLED.

LG Display has revealed its latest innovation in OLED tech, announcing the development of an 88-inch OLED panel with an 8K resolution. The display will be showcased at CES 2018 in Las Vegas from January 9-12.

"The successful development of the world's first 8K OLED display is a milestone for the 8K era and underscores the exciting potential of OLED," said In-Byung Kang, Executive Vice President and Chief Technology Officer at LG Display. "OLED is clearly a next-generation technology leader and for this reason, LG Display is accelerating its research and development into OLED so that we can provide differentiated products to customers and markets." 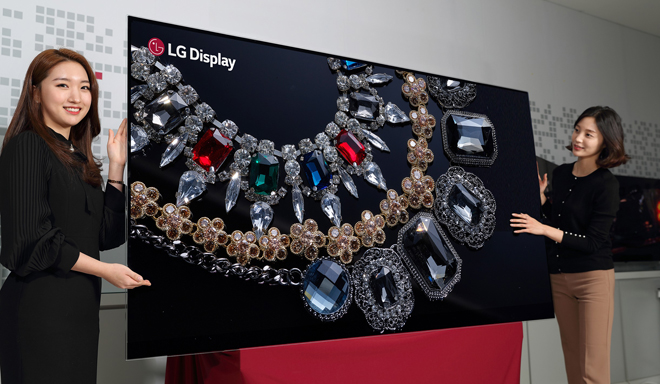 The 88-inch display features an 8K resolution with 33 million pixels (7680 x 4320), four times more than 4K Ultra HD screens (3840 x 2160). In addition, the set uses an OLED panel which is key in allowing LG to develop a higher res screen without sacrificing brightness. When producing a typical LCD panel with non-emissive pixels, increasing the resolution requires a reduction in the size of each pixel. This leads to a lower aperture ratio which reduces the screen's brightness. In order to compensate for this loss, LCDs with higher resolutions need to then boost their backlights which leads to higher energy use and greater material costs. In contrast, aperture ratio is less of a factor with self-emissive OLED panels, making the tech better suited for maintaining brightness performance at higher resolutions. Likewise, OLEDs don't need backlights at all, allowing them to remain thinner and lighter than 8K LCDs while producing deeper black levels.

A consumer version of the LG 88-inch 8K panel has not been detailed, but the display will be demoed at CES next week. OLED TVs currently on the market max out at 4K resolution with sizes as large as 77-inches.