Two Heritage Series speakers will be available in limited runs.

The Klipschorn speaker was first developed in 1946 and is the only speaker model in the world to remain in continuous production for over 70 years. The speaker features a newly enhanced rear low frequency horn that is now fully enclosed, along with a new nameplate celebrating its legendary history, and a small plaque identifying the unit's numbered sequence in the series. In addition, the Klipschorn uses a retro style silver luster grille cloth to complement the speaker's exotic Australian Walnut wood veneer. Finally, each pair is grain matched using wood veneer panels from the same timber, offering a speaker pair that is indistinguishable from the other. A total of 70 handcrafted pairs of the Klipschorn will be produced for the limited edition 70th Anniversary run. The speakers will retail for $16,000 per pair and will be available at authorized retailers and at Klipsch.com in May 2016. 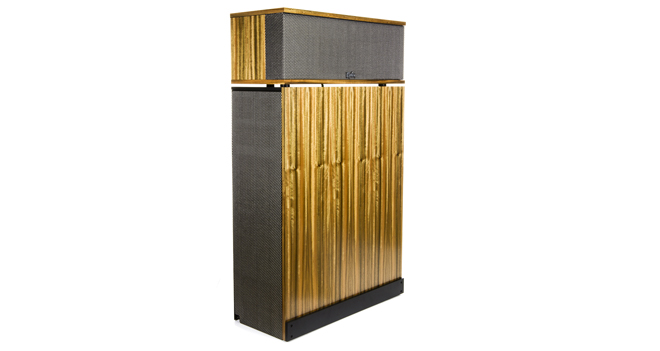 Meanwhile, the Heresy speaker was originally released in 1957, and was designed to serve as a compact center channel speaker to be used with the Klipschorn in three speaker stereo setups. For its current third generation model, the Heresy was upgraded with a more powerful woofer, bi-wire network, and midrange and tweeter compression drivers with a titanium diaphragm. A new nameplate honoring the speaker's history, a small plaque listing the unit's sequence number, the craftsman's signature, and a retro style silver luster grille cloth are featured as well, along with a new matte black slant riser base to complement the speaker's exotic Australian Walnut wood veneer enclosure. Like the Klipschorn, a total of 70 handcrafted pairs of the Heresy have been produced and grain matched using wood veneer panels from the same timber, offering speaker pairs that are indistinguishable from the other. The speakers are now available for $3,200 per pair.