The Cornwall speaker was first introduced in 1959 and was the first Klipsch loudspeaker designed to work from a corner or against a wall -- hence its name. The Cornwall III uses a three-way design with horn-loaded compression drivers for the midrange and treble, and a direct-radiating 15-inch woofer for the low frequencies. Meanwhile, the La Scala speaker was first introduced in 1963 when it was designed for Arkansas gubernatorial candidate Winthrop Rockefeller to use as a public address speaker. The fully horn-loaded, three-way speaker can generate 105 decibels of sound pressure on a single watt. 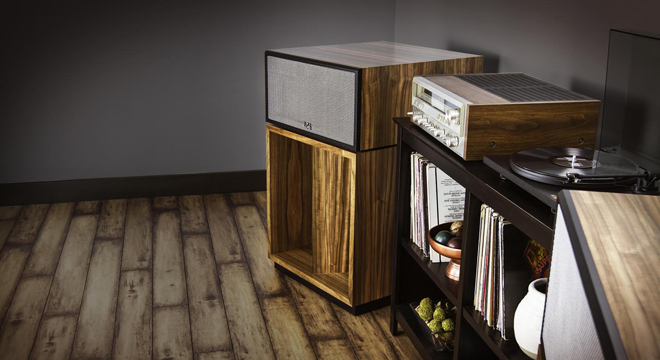 The 70th Anniversary Cornwall ($6,000 per pair) and La Scala ($14,000 per pair) speakers will be available at authorized retailers and at Klipsch.com in October 2016. The limited edition 70th anniversary run will include 70 handcrafted pairs of each model.

The Klipschorn speaker was first developed in 1946 and is the only speaker model in the world to remain in continuous production for over 70 years. The current model features a newly enhanced rear low frequency horn that is now fully enclosed. Meanwhile, the Heresy speaker was originally released in 1957, and was designed to serve as a compact center channel speaker to be used with the Klipschorn in three speaker stereo setups. For its current third generation model, the Heresy was upgraded with a more powerful woofer, bi-wire network, and midrange and tweeter compression drivers with a titanium diaphragm.