Hal Walker's 'At War with the Army' Announced for Blu-ray

The classic musical comedy starring Dean Martin and Jerry Lewis will enlist on Blu-ray this spring.

In an early announcement to retailers, Kino Classics is working on 'At War with the Army' for Blu-ray on March 24.

After their supporting roles in My Friend Irma and My Friend Irma Goes West, At War with the Army was the first film starring the legendary duo of Dean Martin (Artists and Models) and Jerry Lewis (Scared Stiff)... they went on to co-star in thirteen more comedies becoming Paramount Pictures new comedy team and box office champs. Lewis is a hapless bungling private and Martin is his bossy first sergeant and ladies man with the crooner's voice. Together the duo is thrown into a series of classics gags and routines and some great musical pieces. Directed by Hal Walker (Road to Utopia, Sailor Beware), one of the few directors to work both with Martin & Lewis as well as with Hope & Crosby.

Specs and supplements have yet to be revealed, but the suggested list price for the Blu-ray is $24.95.

You can find the latest specs for 'At War with the Army' linked from our Blu-ray Release Schedule, where it is indexed under March 24. 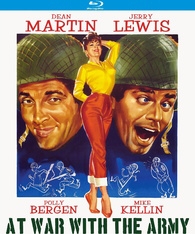