The 1976 thriller starring Jodie Foster and Martin Sheen will arrive on Blu-ray in May.

In an early announcement to retailers, Kino and Scorpion Releasing is preparing 'The Little Girl Who Lives Down the Lane' for Blu-ray on May 10.

Some little girls can be murder! Thirteen-year-old Rynn (Foster) is a gifted prodigy who lives in a big old house with her reclusive father...all alone. Or does she? When Rynn's nosy landlady and a lecherous neighbor (Sheen) begin to suspect that this little girl is hiding a dark and dangerous secret, Rynn is determined to preserve her isolated existence at any cost - and stop those vicious rumors dead in their tracks.

Specs have yet to be revealed, but supplements include: On camera interview with star Martin Sheen; Audio commentary with director Nicolas Gessner; Conversation between Sheen and Gessner; Original Theatrical Trailer; and a reversible wrap.

You can find the latest specs for 'The Little Girl Who Lives Down the Lane' linked from our Blu-ray Release Schedule, where it's indexed under May 10. 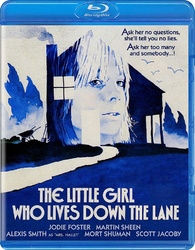