The acclaimed 2016 comedy will arrive on Blu-ray in February.

In an early announcement to retailers, Kino is preparing 'Little Sister' for Blu-ray on February 7.

October, 2008. Young nun Colleen (Addison Timlin) is avoiding all contact from her family, until an email from her mother (Ally Sheedy) announces, Your brother is home. On returning to her childhood home in Asheville, NC, she nds her old room exactly how she left it: painted black and covered in goth/metal posters. Her parents are happy enough to see her, but unease and awkwardness abounds. Her brother is living as a recluse in the guesthouse since returning home from the Iraq war. During Colleen s visit, tensions rise and fall with a little help from Halloween, pot cupcakes, and GWAR. Little Sister is a sad comedy about family a schmaltz-free, pathos-drenched, feel-good movie for the little goth girl inside us all.

You can find the latest specs for 'Little Sister' linked from our Blu-ray Release Schedule, where it is indexed under February 7. 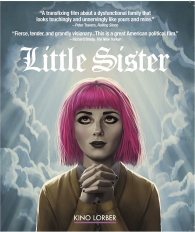