The 1974 film is getting a special edition Blu-ray this summer.

In an early announcement to retailers, Kino will be releasing 'The Taking of Pelham One Two Three: 42nd Anniversary Special Edition' on Blu-ray on July 5.

A gang of thugs who have hijacked a subway train near New York's Pelham Station threaten to kill one hostage per minute. Forced to stall the assailants until a ransom is delivered or a rescue made, transit chief Lt. Garber must somehow ad-lib, con and outmaneuver one of the craftiest, cruelest villains ever.

Specs have yet to be revealed, but supplements will include: Interviews with Star Hector Elizondo, Composer David Shire, and Editor Jerry Greenberg; Audio Commentary by Actor/Filmmaker Pat Healy and Film Historian Jim Healy; "Trailers From Hell" with Josh Olson; Animated Montage of Stills and Posters; Original Theatrical Trailer; and Reversible Cover Art.

You can find the latest specs for 'The Taking of Pelham One Two Three: 42nd Anniversary Special Edition' linked from our Blu-ray Release Schedule, where it is indexed under July 5. 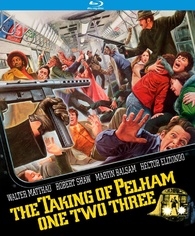