Teddy Told Him To: 'The Pit' Bound for Blu-ray

The 1981 horror film is headed for Blu-ray in October.

In an early announcement to retailers, Kino says 'The Pit' will be available on Blu-ray on October 18.

A solitary and strange boy wreaks revenge on the people who harasses him when he makes a disturbing discovery in the depth of a forest.

The Blu-ray will feature a new high-definition transfer and supplements will include: Interviews with Star Sammy Snyders, Star Jeannie Elias, and Screenwriter Ian A. Stuart; Audio Commentary by Paul Corupe of Canuxploitation.com and Film Historian Jason Pichonsky; and a Trailer Gallery.

You can find the latest specs for 'The Pit' linked from our Blu-ray Release Schedule, where it is indexed under October 18. 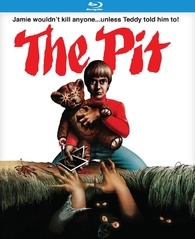