Su Rynard's 'The Messenger' Dated and Detailed for Blu-ray

The critically-acclaimed documentary about the decline of the world's songbird population soars to Blu-ray in May.

In an early announcement to retailers, Kino says 'The Messenger' will arrive on Blu-ray on May 3.

For thousands of years, songbirds were regarded by mankind as messengers from the gods. Today, these creatures - woven inextricably into the fabric of our environment - are vanishing at an alarming rate. Under threat from climate change, pesticides and more, populations of hundreds of species have dipped dramatically. As scientists, activists and bird enthusiasts investigate this phenomenon, amazing secrets of the bird world come to light for the first time in the acclaimed and visually thrilling documentary The Messenger. Find out what's killing our songbirds, and what can be done about it. As in ancient times, songbirds may once again be carrying a message to humans - one that we ignore at our own peril.

This critically-acclaimed documentary was a New York Times Critic's Pick, and was named a Top Ten Audience Favorite at the Hot Docs Canadian International Documentary Festival, as well as a winner at the Jackson Hole Wildlife Film Festival in 2015.

Traveling from regions as diverse as the Boreal Forest, Mount Ararat, and New York City, filmmaker Su Rynard explores the relationship between birds and humans, and how changes in the environment impacts the habitats and, ultimately, the existence of songbirds. The film also highlights the work being done by people who are helping to make a positive impact on the environment in order to preserve and sustain the world's songbird population.

Using a camera capable of shooting up to 1000 fps, Rynard and cinematographer Daniel Grant, working in collaboration with Western University's AFAR Avian research facility, captured images of songbirds in simulated nocturnal migration flying through the wind tunnel. This unique filming process resulted in stunning photography of the birds in motion.

The Blu-ray will include a behind-the-scenes featurette, A Coffee Primer for Birds and People (about the relationship between coffee farms and bird habitats), a deleted scene, an informational booklet (with notes from the director and information on how viewers can help preserve the world's songbird population), the trailer, and an interview with director Su Rynard.

You can find the latest specs for 'The Messenger' linked from our Blu-ray Release Schedule, where it is indexed under May 3. 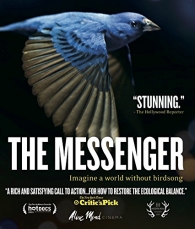