Rouben Mamoulian's 'The Mark of Zorro' Planned for Blu-ray

The 1940 action-adventure is headed for Blu-ray in August.

In an early announcement to retailers, Kino says 'The Mark of Zorro' will arrive on Blu-ray on August 2.

Tyrone Power stars as 19th century nobleman Don Diego de Vega, whose father, the mayor of Los Angeles, is removed from office by the sinister Captain Pasquale (Basil Rathbone), and a new corrupt "alcalde." By day, the crooked politicians rob the citizenry at every turn, and at night, Don Diego, wearing a mask, defies their laws and avenges the innocents. As he leaves his trademark - the letter "Z" - wherever he goes, he also leaves an impression on the mayor's niece, (Linda Darnell), who can't help but love the hero in disguise.

Specs have yet to be revealed, but supplements include: Audio Commentary by Film Historian/Critic Richard Schickel; Tyrone Power: The Last Idol - Documentary; and Trailers.

You can find the latest specs for 'The Mark of Zorro' linked from our Blu-ray Release Schedule, where it is indexed under August 2. 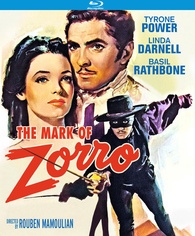