The Italian director's murder mystery and it's English-language counterpart will be available on Blu-ray in just a few weeks.

In an early announcement to retailers, Kino will be releasing 'The Evil Eye (Featuring The Girl Who Knew Too Much)' on Blu-ray on May 19.

Nora Davis (Leticia Roman) jets away to Rome to vacation with Edith, an old family friend. Unfortunately, her trip is anything but relaxing... On the first night, Edith dies - and as Nora runs into the night for help, she becomes an eyewitness to a murder as she sees a woman stabbed to death on the Piazza di Spagna! Being a young woman with an insatiable appetite for murder mysteries, Nora can't get anyone to believe her story, but with the help of the attentive Dr. Marcello Bassi (John Saxon), she learns that a murder did occur on that very spot - 10 years earlier - when Emily Craven fell victim to the "Alphabet Murderer"! What did Nora Davis really see, and who is stalking her through Rome? Could it be the Alphabet Killer, looking for victim D?

Specs have yet to be revealed, but The Evil Eye will feature the AIP American release English-language version mastered in HD from the original 35mm negative, and The Girl Who Knew Too Much will feature the Alternate European cut in Italian with optional English subtitles. Supplements include Audio Commentary by Tim Lucas, author of Mario Bava: All the Colors of the Dark and Original Theatrical Trailer.

You can find the latest specs for 'The Evil Eye (Featuring The Girl Who Knew Too Much)' linked from our Blu-ray Release Schedule, where it is indexed under May 19. 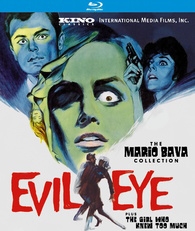