The 1953 adventure film has received a new restoration completed by the 3-D Film Archive, LLC.

As previously reported, Kino is working on 'Those Redheads From Seattle - 3D' for Blu-ray, and now the release date has been announced as May 9.

Historically significant as the first widescreen production from Paramount Studios, Redheads has not been seen in 1.66:1 for more than sixty years. Meticulously restored from 35mm elements by Greg Kintz and the 3-D Film Archive, "3-D's big musical gal-stacked frolic" will be an outstanding addition to your classic 3-D Blu-ray collection.

The Blu-ray will feature 2D and 3D 1080p video and supplements will include:

You can find the latest specs for 'Those Redheads From Seattle - 3D' linked from our Blu-ray Release Schedule, where it's indexed under May 9. 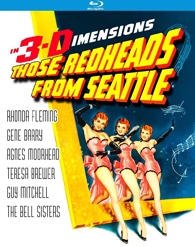 Discs mentioned in this article: (Click for specs and reviews)
Those Redheads from Seattle - 3D (Blu-ray)