Kino to Release Tim Sutton's 'Memphis' on Blu-ray in January

The musical drama will arrive early next year, and pre-orders are now live.

In an early announcement to retailers, Universal is preparing 'Memphis' for Blu-ray on January 13.

A strange singer with god given talent drifts through the mythic city of Memphis under its canopy of ancient oak trees, shattered windows, and burning spirituality. Surrounded by lovers, legends, hustlers, preachers, and a wolfpack of kids, the unstable performer avoids the recording studio and is driven to spend time in his own form of self-discovery. Shown in fragments, his journey drags him from love and happiness right to the edge of another dimension. Featuring an explosive performance and score from the singular recording artist-cum-wizard, Willis Earl Beal, 'Memphis' is a film steeped in folklore, music, surrealism, and the abstract search for glory.

Specs have not been detailed yet, but supplements will include: Booklet Essays by Robert Gordon; Extra Scene-"Willis Meets the Prophet"; On-set Interview with Willis Earl Beal; Podcast Interview with Director Tim Sutton; and Teenie and Charles Hodges of the Hi Rhythm Section in session.

You can find the latest specs for 'Memphis' linked from our Blu-ray Release Schedule, where it's indexed under January 13. 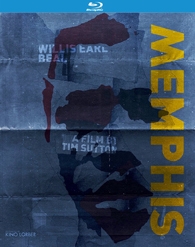 Discs mentioned in this article: (Click for specs and reviews)
Memphis (Blu-ray)