Buster Keaton's THE GENERAL is not simply one of the greatest silent comedies ever made, it is one of the greatest films of any era. In restaging the true story of one man's journey behind enemy lines to reclaim his captured locomotive during the Civil War, Keaton stages a series of complex chases, using lumbering trains as comedic props. Keaton's inventive mind is matched only by his physical athleticism, making THE GENERAL a truly breath-taking experience. Keaton's first foray into making feature films, THREE AGES is a parody of D.W. Griffith's Intolerance, dramatizing man's quest for love in three parallel settings a modern city, the Stone Age, and ancient Rome and loading each plotline with amazing stunts and hysterical sight gags.

The Blu-ray will feature a new 2K restoration and supplements will include:

You can find the latest specs for 'The General/The Three Ages' linked from our Blu-ray Release Schedule, where it's indexed under February 7. 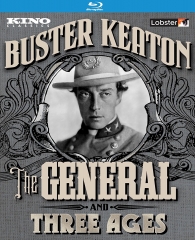 STEAMBOAT BILL, JR. was Buster Keaton's last independent silent comedy and also one of his finest. He stars as the effete son of a gruff riverboat captain (Ernest Torrence), who struggles to earn his father's respect (and the love of beautiful Marion Byron). But the film is best remembered for the climactic cyclone sequence a slapstick tour-de-force in which Keaton's comedic stunts are performed amid the full-scale destruction of an entire town. A stone-faced response to Harold Lloyd's The Freshman, COLLEGE follows a frail scholar as he tries to win the heart of a girl (Anne Cornwall) through athletics. Keaton used his own physical agility to brilliant comic effect, as his character suffers a series of crushing failures. But the greatest surprise comes at the end, when the scrawny intellectual finally releases the physical tiger within.

The Blu-ray will feature a new 2K restoration and supplements will include:

You can find the latest specs for 'Steamboat Bill Jr./College' linked from our Blu-ray Release Schedule, where it's indexed under February 14. 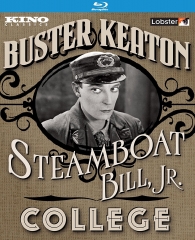