In an early announcement to retailers, Kino will release 'Anatahan' on Blu-ray on April 25.

In the waning days of WWII, a dozen Japanese sailors are stranded on a remote island inhabited only by the foreman of an abandoned plantation and a beautiful young woman, Keiko (Akemi Negishi). As the days turn into months and then into years, the castaways lose their grip on any semblance of societal norms and descend into a daily struggle for dominance and power.

The release will feature a NEW 2K restoration of the uncensored 1958 version (dierctor Sternberg's preferred cut of the film), with restored audio as well as the complete 1953 version of Anatahan and supplements include: Visual essay by critic Tag Gallagher; Interview with Nicholas von Sternberg; U.S. Navy footage of the actual survivors of Anatahan, immediately after their surrender; and Original Theatrical Trailer.

You can find the latest specs for 'Anatahan' linked from our Blu-ray Release Schedule, where it is indexed under April 25. 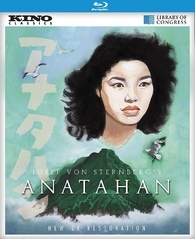