The Best Picture of 2014 according to the National Society of Film Critics and a winner of the Cannes Jury Prize is planned for Blu-ray 3D in April.

In an early announcement to retailers, Kino is set to release 'Goodbye to Language - 3D' on Blu-ray on April 14.

Goodbye to Language continues the master filmmaker's long tradition of cinematic innovation that goes all the way back to his explosive debut feature, Breathless, his work in the French New Wave style with such classics as Contempt and A Woman is a Woman, his challenging and provocative political films, and his pioneering use of video. Constantly expanding and experimenting with the limits of film form, Godard uses 3D to create stunning new visual effects, including separate images visible in each eye, which Scott Foundas in Variety said result "in a series of strange superimpositions that almost seem to enter a fourth, unclassified dimension."

Using 3D technology to mind-bending effect, the film follows a couple whose relationship breaks down along with the images, which in its second half takes a dog's-eye view of the world.

It is a meditation on history and illusion that creates 3D effects more spectacular than any Hollywood blockbuster, figures merging and weaving across the screen along with the film's ideas about romantic love and being-in-the-world. It has the feeling of a final statement, but knowing Godard's penchant for re-invention, hopefully it is yet another beginning to an extraordinary career.

The 2-disc set will feature both the 3D and 2D versions of the film and supplements will include a booklet essay on the film by film scholar David Bordwell, the theatrical trailer, and the Canon Europe Interview with Jean-Luc Godard.

You can find the latest specs for 'Goodbye to Language - 3D' linked from our Blu-ray Release Schedule, where it is indexed under April 14. 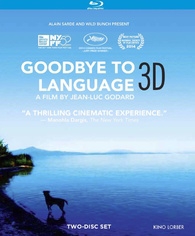