The 1948 film-noir classic is getting the Blu-ray treatment in September.

In an early announcement to retailers, Kino will be releasing 'Road House' on Blu-ray on September 13.

"This slam-bang melodrama of troubled love, murder and unique revenge in a sleazy nightclub" (Cue) is a noir classic filled with "suspense" (Los Angeles Time), "dramatic punch" (Motion Picture Herald) and a "macabre demonstration of a wildly jealous man who is bent on ruining two lives" (The Hollywood Reporter).

Jefty Robbins (Richard Widmark) owns a roadhouse near the Canadian border which is managed by his playboy buddy Pete Morgan (Cornel Wilde) and cashier Susie Smith (Celeste Holm). After a trip to Chicago, Jefty brings back Lily Stevens (Ida Lupino), chanteuse with whom he is obviously smitten. At first Pete is loathe to hire another one of Jefty's girls but Lily proves her talent is worth the paycheck. When Jefty goes on a hunting trip with some pals and prepares to ask Lily to marry him, Pete and Lily share some intimate time together and realize they are in love. The news sends Jefty into a psychopathic tailspin. He devises a plan to frame Pete and manically begins a game of endless and brutality, making "the lovers suffer and suffer - until their cup of bitterness runs over" (Daily News)!

Specs have yet to be revealed, but supplements include: Audio Commentary by Film Noir Historians Kim Morgan and Eddie Muller; Killer Instincts: Richard Widmark and Ida Lupino at Twentieth Century Fox Featurette; and Original Trailers.

You can find the latest specs for 'Road House' linked from our Blu-ray Release Schedule, where it is indexed under September 13. 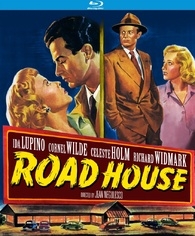