The classic 1954 science fiction film will be getting a Blu-ray 3D release in March.

In an early announcement to retailers, Kino will be releasing 'Gog - 3D' on Blu-ray on March 1.

Newly restored in HD and 3-D! In a remote, underground research laboratory two scientists, engaged in space travel research, are frozen to death in a cold chamber when their instruments comes under the control of an unknown power. A security agent, Dr. David Sheppard (Richard Egan, The 300 Spartans) arrives at the secret space research base, home of two experimental robots to investigate the possible sabotage. Early in his investigation, Sheppard finds that the underground laboratory under the control of the Supercomputer NOVAC and experimental robots GOG and MAGOG. Herbert L. Strock (The Crawling Hand) directed this Sci-Fi/Horror classic with a stellar cast that includes Constance Dowling (Black Angel), Herbert Marshall (The Letter) and William Schallert (TV s The Patty Duke Show).

Specs have yet to be revealed, but supplements include: Audio Commentary by Film Historians Tom Weaver, Bob Furmanek and David Schecter; and Trailers.

You can find the latest specs for 'Gog - 3D' linked from our Blu-ray Release Schedule, where it is indexed under March 1. 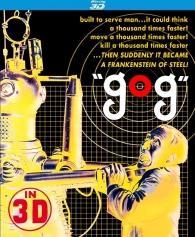