The classic western will be getting the Blu-ray treatment in August.

In an early announcement to retailers, Kino says 'Rawhide' will arrive on Blu-ray on August 2.

A stagecoach stop employee and a stranded woman traveler find themselves at the mercy of four desperate outlaws intent on robbing the next day's gold shipment. Cinematography by Milton R. Krasner (All About Eve, An Affair to Remember).

Specs have yet to be revealed, but supplements include: Susan Hayward: Hollywood's Straight Shooter Featurette; Shoot it in the Lone Pine! - Featurette; Restoration Comparison; and Trailers.

You can find the latest specs for 'Rawhide' linked from our Blu-ray Release Schedule, where it is indexed under August 2. 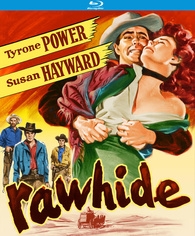