The 1922 silent classic will be getting the high-definition treatment in August.

In an early announcement to retailers, Kino says 'Dr. Mabuse: The Gambler' will be available on Blu-ray on August 23.

A truly legendary silent film, Dr. Mabuse, the Gambler had a major impact on the development of the crime thriller, building upon the work of the pioneering French film serialist Louis Feuillade (Les Vampires) and firmly establishing it as a significant film genre. This epic two-part tale was originally released as two separate films, respectively subtitled The Great Gambler and Inferno, and that format is reproduced here.

The plot revolves around the pursuit of arch fiend Dr. Mabuse, a gambler, hypnotist, master of disguises and all-around criminal mastermind. Mabuse was the prototype for the sort of evil genius super-villains that would later become common in movies, whether it be in the James Bond pictures or in comic book adaptations like Superman and Batman. The film is dominated by the presence of Rudolf Klein-Rogge as Mabuse. A top German actor of the silent era, he is best known today for his performance as the mad scientist Rotwang in Lang's Metropolis.

Dr. Mabuse, the Gambler contains many of the elements that were expected from the crime genre at the time, including characters who slip in and out of disguise, mind control, gambling clubs, exotic women, brutal henchmen and unexpected plot twists. Lang's directorial ability to handle such pulp material in a masterful fashion, while also using it as a way to examine the decadence of Germany in the 1920s, reaffirms his status as one of the true greats of the silent era.

The 2-disc set will feature a new 2k restoration and supplements include: The Story Behind Dr. Mabuse," a 52-minute documentary on the making and restoration of the film.

You can find the latest specs for 'Dr. Mabuse: The Gambler' linked from our Blu-ray Release Schedule, where it is indexed under August 23. 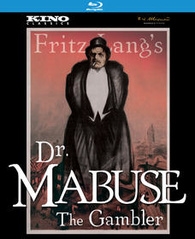