The 1921 fantasy thirller will arrive on Blu-ray in August.

In an early announcement to retailers, Kino is preparing 'Destiny' for Blu-ray on August 30.

A dizzying blend of German Romanticism, Orientalism, and Expressionism, Fritz Lang s DESTINY (Der made Tod) marked a bold step for Lang, away from the conventional melodrama and into the kind of high-concept filmmaking that would culminate in such über-stylized works as Die Nibelungen and Metropolis. DESTINY is a visually ambitious, cinematic allegory in which a young woman (Lil Dagover) confronts the personification of Death (Bernhard Goetzke), in an effort to save the life of her fiancé (Walter Janssen). She is transported to a Gothic cathedral, where lives are represented as burning candles of varying length. Death weaves three romantic tragedies, and offers to unite the girl with her lover, if she can prevent the death of the lovers in at least one of the episodes. Thus begin three exotic scenarios of ill-fated love, in which the woman must somehow reverse the course of destiny: Persia, Quattrocento Venice, and a fancifully-rendered ancient China. Restored by Anke Wilkening on behalf of the Friedrich-Wilhelm-Murnau-Stiftung, this definitive presentation of Destiny preserves the original German intertitles and simulates the historic color tinting and toning of its initial release. Accompanying the film is a newly-composed score by Cornelius Schwehr as a commissioned composition by ZDF / ARTE performed by the 70-member Berlin Rundfunk Symphony Orchestra under the direction of conductor Frank Strobel.

You can find the latest specs for 'Destiny' linked from our Blu-ray Release Schedule, where it's indexed under August 30. 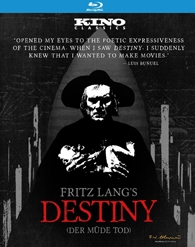 Discs mentioned in this article: (Click for specs and reviews)
Destiny (1921) (Blu-ray)