The acclaimed 1996 documentary is planned for Blu-ray in April.

In an early announcement to retailers, Kino is bringing 'Microcosmos' to Blu-ray on April 25.

One of the most successful nature documentaries of all time, Microcosmos (1996) captures the fun and adventure of a spectacular hidden universe revealed in a breathtaking, close-up view unlike anything you ve ever seen! Your family will marvel at a pair of stag beetles dueling like titans. The kids will stare bug-eyed as a magnificent army of worker ants race to stock their larder ... while trying to avoid becoming a feisty pheasant s dinner. And you ll have a front row seat to witness an amazing transformation from caterpillar to butterfly, the remarkable birth of a mosquito, and several other minute miracles of life. With its tiny cast of thousands, Microcosmos leaves no doubt that Mother Nature remains the greatest special effects wizard of all (New York Times).

Specs have yet to be revealed, but supplements include: Making of the documentary (88 minutes); Video interview with directors Claude Nuridsany and Marie Perennou; and Original trailer.

You can find the latest specs for 'Microcosmos' linked from our Blu-ray Release Schedule, where it is indexed under April 25. 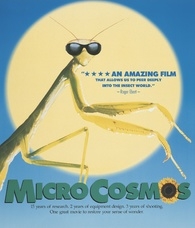