The 1960 adventure film is planned for high-definition in March.

In an early announcement to retailers, Kino is preparing 'September Storm - 3D' for Blu-ray on March 28.

A rediscovered gem newly restored by the 3-D Film Archive, September Storm is a CinemaScope Stereovision adventure that plunges the viewer into the depths of the Balearic Sea, off the coast of Spain. Mark Stevens stars as a treasure-hunter who convinces a yacht hand (Asher Dann) to take him and his cohort (Robert Strauss) on a quest for gold doubloons. They encounter many spectacles along the way: a violent storm, man-eating sharks, a deadly man o' war, but perhaps the most stunning sight of all is the bewitching model (Joanne Dru) who embarks on the journey with them. Director Bryan Haskin (The War of the Worlds, Robinson Crusoe on Mars) uses the 3-D camera to maximum effect, while hardboiled writer W.R. Burnett (The Asphalt Jungle, Little Caesar) injects the screenplay liberal doses of seduction and betrayal.

You can find the latest specs for 'September Storm - 3D' linked from our Blu-ray Release Schedule, where it is indexed under March 28. 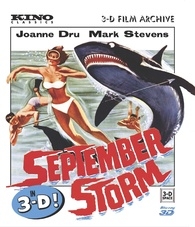