The 1960s horror flick will cast a spell on Blu-ray in August.

As previously reported, Kino is preparing ''Burn, Witch, Burn' for Blu-ray this summer, and now the date has been set for August 18.

Unfortunate scientist Norman Taylor (Peter Wyngarde) discovers that his wife (Janet Blair) may be a reborn witch. Although his skeptical mind allows for no such occurrence, he becomes increasingly suspicious as the voodoo activity around his household grows more prevalent. Folks are murdered, eagles disrupt the good doctor's study, and general havoc is unleased. It's up to Taylor to figure out who the real culprit of all the strange phenomena is. From the same team that brought you THE CONQUEROR WORM, THE PIT AND THE PENDULUM, and other midnite horror classics comes this adaption of Fritz Leiber's CONJURE WIFE. (The Gothic horror novel had been previously adapted in 1944, as WEIRD WOMAN).

Specs have yet to be revealed, but supplements include: Brand New on-camera interview with star Peter Wyngarde; Audio commentary with writer Richard Matheson; and Original Trailer.

You can find the latest specs for 'Burn, Witch, Burn' linked from our Blu-ray Release Schedule, where it's indexed under August 18. 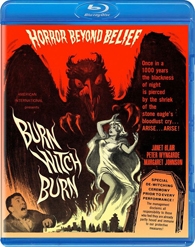