In an early announcement to retailers, Kino says 'The Unwanted' will arrive on Blu-ray on July 14.

A Southern gothic retelling of Sheridan LeFanu's Carmilla, The Unwanted stars Hannah Fierman (V/H/S) as Laura, a vulnerable young woman beguiled by a drifter (Christen Orr) who has come to her rural town in search of clues to her mother's disappearance. The two women uncover dangerous secrets kept by their mothers, arousing the suspicion of Laura s father (William Katt, Carrie, TV's The Greatest American Hero) who will go to shocking extremes to ensure that the family's dark secrets remain buried.

Specs have yet to be revealed, but supplements include: Making of Documentary Feature, Deleted Scenes, and Theatrical Trailers.

You can find the latest specs for 'The Unwanted' linked from our Blu-ray Release Schedule, where it is indexed under July 14. 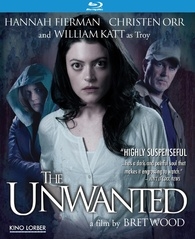