The acclaimed dramatic thriller is headed for Blu-ray next month.

In an early announcement to retailers, Kino will be releasing 'Rabin: The Last Day' on Blu-ray on June 28.

On the evening of Saturday, November 4th, 1995, Prime Minister Yitzhak Rabin was assassinated with three bullets at the end of a political rally in the center of Tel-Aviv. His killer, apprehended at the scene, was a 25-year-old student (and observant Jew). The following investigation reveals a frightening world that made this killing possible: a subculture of hate fueled by hysterical rhetoric, paranoia and political intrigue. In Rabin, The Last Day, acclaimed filmmaker Amos Gitai (Kadosh) masterfully combines staged re-enactments with actual news footage of the shooting (and its aftermath) to create a thought-provoking political thriller.

You can find the latest specs for 'Rabin: The Last Day' linked from our Blu-ray Release Schedule, where it is indexed under June 28. 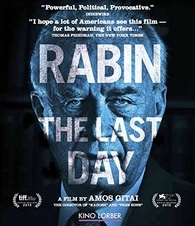