Aleksey German's 'Hard to Be a God' Blu-ray Dated

The sci-fi drama is now up for pre-order.

In an early announcement to retailers, Kino is preparing 'Hard to Be a God' for Blu-ray on June 30.

A group of scientists is sent to the planet Arkanar to help the local civilization, which is in the Medieval phase of its own history, to find the right path to progress. Their task is a difficult one: they cannot interfere violently and in no case can they kill. The scientist Rumata tries to save the local intellectuals from their punishment and cannot avoid taking a position. As if the question were: what would you do in God's place? Director's statement Aleksei wanted to make this film his entire life. The road was a long one. This is not a film about cruelty, but about love. A love that was there, tangible, alive, and that resisted through the hardest of conditions.

Specs have not been detailed yet, but supplements will include: Behind-the-Scenes Documentary; Booklet with Director's Statement by Aleksei German and Essays by Alexey German Jr. and Aliza Ma; Introduction by co-screenwriter Svetlana Karmalita; and Trailer.

You can find the latest specs for 'Hard to Be a God' linked from our Blu-ray Release Schedule, where it's indexed under June 30. 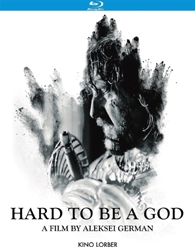 Discs mentioned in this article: (Click for specs and reviews)
Hard to Be a God (Blu-ray)