'Adios, Sabata' & 'The Return of Sabata' Dated for Blu-ray

The 1970s westerns are riding toward Blu-ray in May.

In an early announcement to retailers, Kino is preparing Adios, Sabata and The Return of Sabata for Blu-ray on May 9.

Adios, Sabata - Legendary spaghetti western producer Alberto Grimaldi (The Good, the Bad, and the Ugly) produced this rousing chapter of the Sabata series, which sees screen icon Yul Brynner (Taras Bulba, Invitation to a Gunfighter) stepping into the title character's boots. Under the brutal rule of local garrison leader Colonel Skimmel and European tyranny, a group of Mexican revolutionaries hire gunslinger Sabata (Brynner) to rob a transport of Austrian gold in order to buy weapons. But Colonel Skimmel has other plans, taking the gold for himself and blaming the revolutionaries, but no scheming colonel is going to keep Sabata from earning his pay. Gianfranco Parolini (Sabata, God s Gun) directed this rip-roaring, action-packed western filled with fabulous gadgets and wicked humor.

The Blu-ray will feature 1080p video, a DTS-HD MA mono soundtrack, and supplements will include Trailers and Reversible Art. 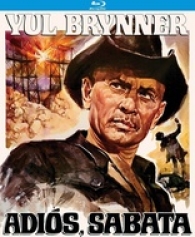 The Return of Sabata - The man with gunsight eyes is back and this time, he's judge, jury and executioner. The great Lee Van Cleef (Death Rides a Horse, Barquero) returns as the famous freewheeling gunslinger Sabata. This third and final go-round for the enigmatic sharpshooter who administers a unique brand of justice in the American West in the years following the Civil War finds Sabata in the role of victim. Sabata's skills as a gambler and thief are unparalleled. However, when a shifty band of desperadoes bilks him out of $5,000, he wants revenge. Legendary producer Alberto Grimaldi (The Good, the Bad and the Ugly) and director Gianfranco Parolini (Sabata, We Are No Angels) took the Sabata series to another level, delivering the best and most action-packed film in the trilogy.

The Blu-ray will feature 1080p video, a DTS-HD MA mono soundtrack, and supplements will include Trailers and Reversible Art. 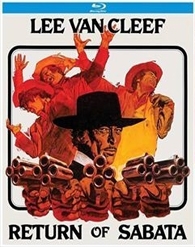 You can find the latest specs for both titles listed above linked from our Blu-ray Release Schedule, where they are indexed under May 9.