The teen comedy is headed for Blu-ray in November.

In an early announcement to retailers, Invincible Pictures says 'Yoga Hosers' will be available on Blu-ray on November 22.

15-year-olds Colleen Collette and Colleen McKenzie (Lily-Rose Depp and Harley Quinn Smith) are on their smartphones constantly, sing in a small band, and take yoga classes. The girls will do just about anything to receive an invitation to a senior party. But when they discover the leader of a Nazi splinter group has been raising an army of monsters beneath the store where they work, the teens team up with a legendary man-hunter (Johnny Depp) to stop the world-threatening uprising.

You can find the latest specs for 'Yoga Hosers' linked from our Blu-ray Release Schedule, where it is indexed under November 22. 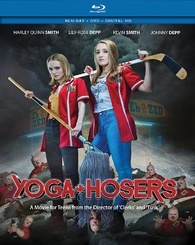