U2: iNNOCENCE + eXPERIENCE Live In Paris

The legendary band is coming to Blu-ray in June.

In an early announcement to retailers, Interscope is preparing 'U2: iNNOCENCE + eXPERIENCE Live In Paris' for Blu-ray on June 10.

U2's iNNOCENCE + eXPERIENCE Tour kicked off in Vancouver in May 2015 and, to date, has played to over 1.2 million fans in 22 cities across Europe and North America. Staged in the round, the tour features multiple performance areas plus a state of the art 100 foot LED screen suspended above a 118 foot walkway running the length of the arena floor. Combined with an innovative suspended sound system, the tour has delivered mind-blowing sound and visuals from every seat in every venue, as every night has seen U2 reinvent the arena show (Rolling Stone). At the heart of U2 iNNOCENCE + eXPERIENCE - Live In Paris are, of course, the songs: The band performs a staggering selection from its timeless catalogue, new and old: From Songs of Innocence highlights featuring Cedarwood Road, Song for Someone and the stripped down live version of Every Breaking Wave, as well as career-spanning staples including I Will Follow, Pride (In the Name of Love), Vertigo, Sunday Bloody Sunday, Until The End of the World, Beautiful Day, Where The Streets Have No Name and many more.

Specs have not been detailed yet, but supplements will include: Cedarwood Road – A Gavin Friday Narration; Out Of Control (December 6th 2015 – Paris); The Future Better Hurry Up; The Electric Co. (November 11th 2015 - Paris); i + e - Behind The Scenes With The Director; Bad / People Have The Power (With Patti Smith - December 6th 2015 - Paris); The Wanderer; The Troubles; Music Videos; Ordinary Love; Invisible; The Miracle (Of Joey Ramone); Every Breaking Wave - A Film By Aoife Mcardle; Song For Someone (Directed By Vincent Haycock); Song For Someone (Behind The Scenes); and Song For Someone (Directed By Matt Mahurin).

You can find the latest specs for 'U2: iNNOCENCE + eXPERIENCE Live In Paris' linked from our Blu-ray Release Schedule, where it's indexed under June 10. 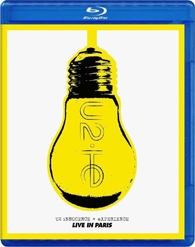 Discs mentioned in this article: (Click for specs and reviews)
U2: iNNOCENCE + eXPERIENCE Live In Paris (Blu-ray)