In an early announcement to retailers, interscope is preparing 'Bryan Adams: Reckless' for Blu-ray Audio on November 24.

Since its release in 1984, 'Reckless' has sold over 12 million copies worldwide. It has spawned huge hits such as 'Run to You', 'Kids Wanna Rock', 'Somebody', 'Summer of '69', 'One Night Love Affair' and 'It's Only Love' a duet with the incomparable Tina Turner. 'Reckless' also gave Bryan his first U.S. #1 on Billboard with 'Heaven' as well as a Diamond Award for over a million sold in his home country of Canada. The album was the turning point in Adams' career, leading him to tour all over the world and garner legions of fans with his legendary live shows. The 'Reckless' reissue has been personally overseen by Bryan working with many of the original team including Bob Clearmountain, Bob Ludwig and Jim Vallance. The 2014 deluxe remaster by Bob Ludwing enticingly includes seven previously unreleased bonus tracks. These tracks were written as demos with Jim Vallance - the co-writer on the Reckless album. Of utmost interest to fans will be the actual inclusion of the track 'Reckless' which due to deadlines did not make it onto the original album.

Specs and supplements have not been detailed yet, but suggested list price for the 2CD/DVD/Blu-Ray Pure Audio deluxe edition is $79.98.

You can find the latest specs for 'Bryan Adams: Reckless' linked from our Blu-ray Release Schedule, where it's indexed under November 24. 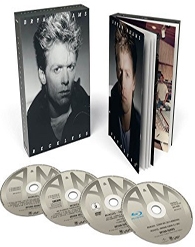