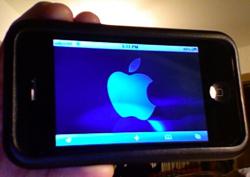 According to an announcement from Spatial View and Sony Music Entertainment Germany, the new 3DeeSlide iPhone and iPod accessory will allow users to watch glasses-free 3D movies.

3D movies are experiencing a great amount of popularity in theaters, with an expected boom in upcoming Blu-ray releases, and 'Avatar: The Game' bringing three dimensional viewing to game consoles. A practical solution for viewing 3D content while outside of the home – one that doesn’t involve a separate headset or glasses – has not yet been established.

Spatial View, a company specializing in stereoscopic 3D, offers the 3DeeSlide as the solution. Using a lenticular screen, this device slides over your iPhone or iPod Touch and allows the viewing of three-dimensional content without the need for glasses.

The viewing angle is a bit limited, but when it comes to mobile devices, there’s usually only one person watching. Users are recommended to keep their device at a 90 vertical viewing angle, perpendicular to their eye line. The sweet spot distance wise is between 12” and 16” according to Spatial View.

The 3DeeSlide will be available shortly from in Germany (one of the countries that Spatial View calls home) and is expected to be on Amazon soon after. The product will be available individually or bundled with Sony Music’s “forsenses” Blu-ray disc, though a price has not yet been announced.