The action-thriller soars to Blu-ray next week.

In an early announcement to retailers, Inception Media Group is set to release 'Red Sky' on Blu-ray on March 10.

While performing routine surveillance over hostile territory in Iraq, two U.S. Navy fighter pilots, Butch Masters (Cam Gigandet) and Tom Craig (Shane West), are ordered to embark on a bombing mission. After confirming authorization, they complete the attack, which, unbeknownst to them, is actually on friendlies. Resulting in the death of an American soldier and, to their shock, with no record of authorization to be found, both pilots are dishonorably discharged.

Years later, Navy intelligence offers Masters a chance to clear his name by completing one last mission—to quietly destroy a weapon of mass destruction on foreign soil. Accepting the task, he recruits retired pilots from the old team, but Craig is nowhere to be found. Once there, things go horribly wrong and Masters discovers his one-time ally and fellow soldier is now serving the enemy. With time running out, he must lead his rogue squadron to victory in order to restore his honor and to save millions of innocent lives.

You can find the latest specs for 'Red Sky' linked from our Blu-ray Release Schedule, where it is indexed under March 10. 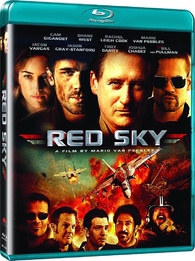