'WolfCop' Howling on Blu-ray in January

Lowell Dean's werewolf comedy will howl at Blu-ray in January. Pre-order it here.

In an early announcement to retailers, Image Entertainment will be releasing 'WolfCop' on Blu-ray on January 20.

Officer Lou Garou isn't the best cop in small-town Woodhaven - in fact, he's probably the worst. He mostly just looks to avoid anything that could possibly interfere with his goal of getting wasted. One evening during the night shift, Lou investigates a mysterious disturbance at the edge of town and wakes up with a pentagram carved in his chest, heightened senses and body hair that's growing at an alarming rate. To solve the mystery of his transformation, he'll have to take on a case no normal cop would be able to solve, but this half-man, half-beast is not just a cop…he's a WolfCop.

You can find the latest specs for 'WolfCop' linked from our Blu-ray Release Schedule, where it is indexed under January 20. 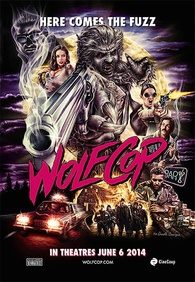