The rom-com is due out on Blu-ray at the end of the month.

In an early announcement to retailers, Image Entertainment is preparing to release 'The Rewrite' on Blu-ray on March 31.

Once upon a time, Keith Michaels (Hugh Grant) was an award-winning Hollywood screenwriter, but divorce and a string of unsuccessful films have left him with nothing but bad debts and blank pages. So when his agent arranges a job as guest screenwriting professor at a remote university in upstate New York, a desperate Keith can't say no. Initially hoping to give minimal effort to actual teaching so he can focus on his next script, Keith unexpectedly finds himself becoming invested in his students lives, including Holly (Marisa Tomei), a single mom looking to start her own new chapter.

You can find the latest specs for 'The Rewrite' linked from our Blu-ray Release Schedule, where it is indexed under March 31. 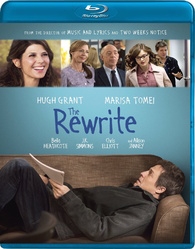