The film starring Kevin Durand and Lucas Haas will be hunted on Blu-ray this fall.

In an early announcement to retailers, Image Entertainment will be releasing 'Dark Was the Night' on Blu-ray exclusively at Best Buy on September 1 with a retailer-wide release on November 3.

Maiden Woods is a remote and quiet town of decent hard-working people, but something stirs in the dark woods surrounding this isolated community. After a logging company decimates an area of the forest, a rash of increasingly violent and unexplainable events transpires. Sheriff Paul Shields (Kevin Durand) and his deputy (Lukas Haas) struggle to confront their own personal demons while facing down a new breed of raw terror that is possibly older than humanity itself… and much, much hungrier.

You can find the latest specs for 'Dark Was the Night' linked from our Blu-ray Release Schedule, where it is indexed under November 3. 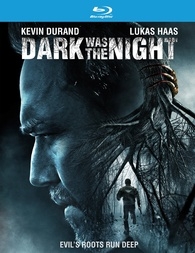