Stephen Sondheim's fairy tale musical will enchant Blu-ray in December, and you can pre-order the disc here.

In an early announcement to retailers, Image Entertainment is preparing 'Into the Woods (1991)' for Blu-ray on December 2.

A baker and his wife journey into the woods in search of a cow, a red cape, a pair of golden slippers and some magic beans — all necessary to lift the curse that has kept them childless. They meet up with a cast of characters drawn from classic fairy tales in a modern re-imagining of those stories. From the original Broadway production of the musical with music and lyrics by Stephen Sondheim and book by James Lapine.

Specs and supplements have not been detailed yet, but suggested list price for the Blu-ray is $24.98.

You can find the latest specs for 'Into the Woods (1991)' linked from our Blu-ray Release Schedule, where it's indexed under December 2. 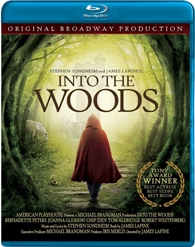 Discs mentioned in this article: (Click for specs and reviews)
Into the Woods (1991) (Blu-ray)