The revenge thriller arrives on Blu-ray only at Best Buy at the end of the month.

In an early announcement to retailers, Image Entertainment says 'Return to Sender' will hit Blu-ray on September 29 exclusively at Best Buy, with a retailer-wide release on December 1.

Miranda (Academy Award nominee Rosamund Pike, Gone Girl) is a dedicated nurse, an exquisite cake maker and an impeccable friend. But when she agrees to a blind date and the wrong man comes to her door…her perfect world is shattered by a brutal assault. Even after her attacker, William (Shiloh Fernandez, Evil Dead), is convicted and locked away for the crime, Miranda can't overcome the fear and trauma enough to put her orderly life back together. Desperate for closure, she reaches out to William – first through letters, then prison visits – and slowly builds a relationship with him. But when William is paroled and comes looking for her, Miranda seizes the opportunity to exact revenge.

You can find the latest specs for 'Return to Sender' linked from our Blu-ray Release Schedule, where it is indexed under September 29. 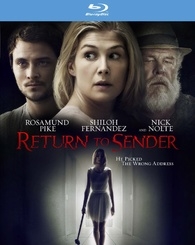